After months of hints thrown about, Microsoft officially announced Windows 11 in an online event on June 24. Windows 11 has been a long time coming as Windows 10 was released all the way back in 2015 and Windows 10X was confirmed dead earlier this year.

The new operating system will come with a slew of new features, new integrations, and performance enhancements.

The best part of Windows 11 is that it will completely free for Windows 10 users just like how its predecessor was free to people who had Windows 7 and Windows 8, but your computer will have to meet hardware requirements. Your computer will need to have a 64-bit CPU, 4GB of RAM, and 64GB of storage to name a few requirements, and if you would like to know if your computer meets these standards, Microsoft has a free app called PC Health Check that lets you check. 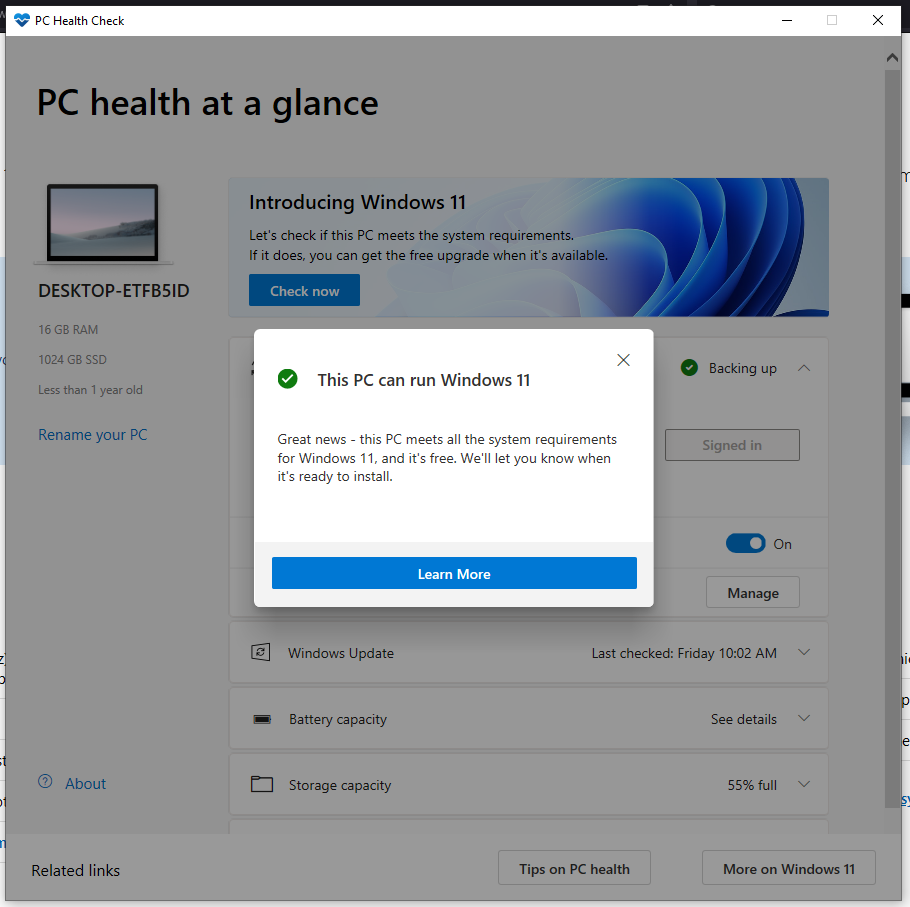 As seen in the screenshot above, my computer is able to run Windows 11 when it comes out later this year.

In the Windows 11 event, Microsoft showed off the new user interface and Start menu, now centered on the taskbar, which opens up into a window with pinned apps, recently opened document, and a search bar, so no more live tiles. Instead, Microsoft is adding “Snap Layouts”, a feature that allows users to control window layouts and combine multiple open applications into a single window.

Windows 11 will also include “Snap Groups” which are a way for users to save a particular collection apps and the layout, and use them again at a later time.

Windows 11 will also revamp Microsoft Teams and the Microsoft Store. Teams will now be fully integrated into the new OS with Chief Product Officer Panos Panay say users will be able to “chat, call, video call, with anyone anywhere in the world” and on any platform or device.

Microsoft when they introduced Android apps on Windows 11 #MicrosoftEvent pic.twitter.com/rTdzBX9PHu

In the same week Windows 11 was announced, Microsoft has achieved a $2 trillion market value making it the second publically traded American company to do so (the other is Apple). Microsoft stock has gone up 64% since April 2020 as the pandemic has proven to be a big boost for the company since many people took to working from home during this time.

I have stock in Microsoft, so I hope Windows 11 is good

It’s clear that the pandemic heavily influenced the design choices for Windows 11 from Snap Layouts and Teams integration; all in an attempt to make working from home an easier experience. Panay acknowledged this by saying “A lot of the time spent over the last 18 months…was looking at Windows and [what’s next for hybrid work]…”

I’m personally excited for this Windows 11. It seems to have a lot of great features and could lift the Microsoft brand even higher.

Bitcoin
Crypto News
Crypto News
Bitcoin
We use cookies on our website to give you the most relevant experience by remembering your preferences and repeat visits. By clicking “Accept”, you consent to the use of ALL the cookies.
Cookie settingsACCEPT
Manage consent