Infamous tech YouTuber TechLead started the month of July by releasing his own cryptocurrency called Million, and in the past month or so, the community surrounding this token has imploded into a maelstrom of plummeting value, YouTube exposé videos, and a disgruntled former admin.

Criticisms have been lobbied at TechLead who responds by doubling down on his stances and making petty immature remarks. Meanwhile, supporters of the token continue to hype up Million and the man behind it.

I highly recommend reading the previous article done on TechLead as it lays the groundwork of his YouTube career and as well the skepticism towards Million.

Within the first two weeks of its release, Million hit its peak worth of $223.17 for one token. Soon afterward it plummeted down $24.36 a token at the time of this writing; in other words, Million has gone down 85% and it continues to go down.

Furthermore, TL created one of the first Social Tokens which are going to be the next big thing after NFTs, etc. (look it up). He simply sat down and thought about what tokenomics could make a coin successful and what could make it fail – creating one with great fundamentals

Social media is filled with critics and supports alike arguing over the future value of Million. Supporters are keen to come to the defense of their investment and TechLead by constantly denying that it’s a scam and that all the criticisms are based on either misinterpretation, poor research, or outright misinforming people.

Coffeezilla is a YouTuber who calls himself the “Internet Detective” and he recently did a video all about this situation titled “TechLead Scammed You With Million Token (as a millionaire)” where he calls Million Token a “clever scam.” Based on his own research, he argues that TechLead used careful wording and outright lies to convince people to buy the cryptocurrency.

I can no longer be silent. Coffeezilla abusively molested me for views. #metoo He's been sexually inappropriately touching up photos of me and stalking me. Me Too. Support survivors of harassment at https://t.co/GimIUTLL2o pic.twitter.com/eXQU9sjrVI

TechLead responds to this criticism by creating a video response to Coffeezilla’s video where he attempts to discredit the critic and brag about his success. He even went as far as to call Coffeezilla a racist and accuse him of “[molesting] him for views.”

The community around TechLead and his cryptocurrency seem to be delusional; a cult of personality filled with sycophants who are quick to brush off any sort of criticism as FUD or fear, uncertainty, and doubt. Going by what’s seen on the official Discord server and Twitter threads, negativity is not allowed towards Million, but that hasn’t stopped others from raising questions and concerns. One of these people was TechLead’s partner in the venture; an admin who went by the name Diablo.

Going off leaked Discord messages, Diablo had concerns over how the project was being run and ultimately left the Million Token project over TechLead’s management. A thread on the Cryptocurrency subreddit states that after Diablo left, people were banned for supporting his concerns or making light of the situation. 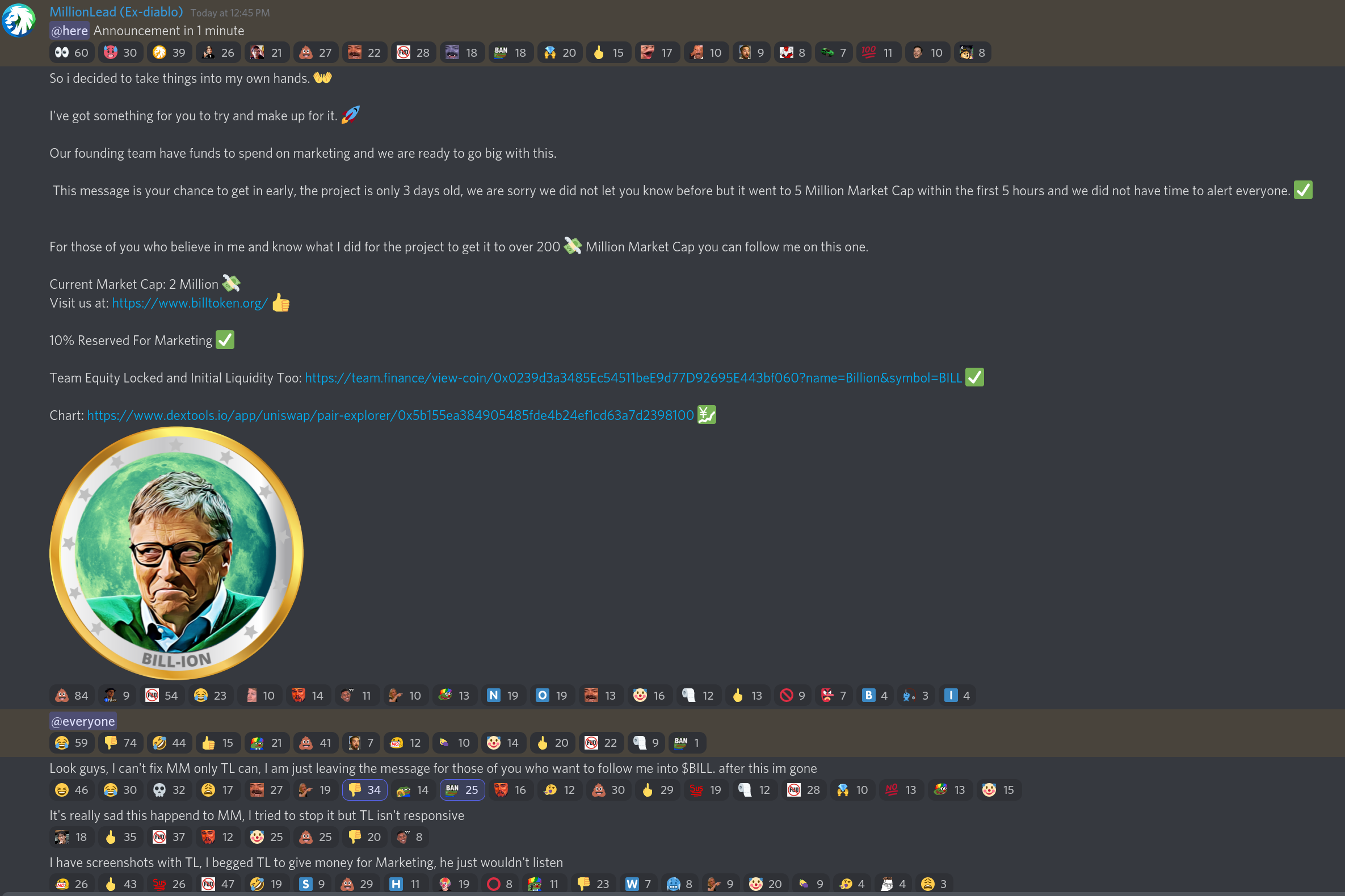 Funny enough, Diablo would soon after creating Billion Token in response to TechLead’s project. Users on the Million Discord chat are quick to attack Billion Token and some crypto YouTubers have launched their own campaigns to discredit Diablo’s new project.

All in all, it’s a car wreck of a situation and one that I personally can’t help but enjoy and state at it. Right now, it’s about waiting for the exam scam.

TOTAL Crypto Market Value Hits a TREMENDOUS $1.9 TRILLION for the FIRST TIME SINCE MAY

Bitcoin
Editorial
NFT
NFT
We use cookies on our website to give you the most relevant experience by remembering your preferences and repeat visits. By clicking “Accept”, you consent to the use of ALL the cookies.
Cookie settingsACCEPT
Manage consent