Announced during a recent event, Adobe is launching a new feature in Photoshop that helps prove that the person selling an NFT is the same person who made it.

The feature is called Content Credentials and it will also allow NFT creator to link their Adobe ID and account to their cryptocurrency wallet to provide a sort of verified certificate proving the source is authentic. Only select NFT marketplaces will integrate with this new feature like OpenSea, SuperRare, and Rarible.

One of the biggest problems plaguing NFTs is how easy it is to steal one and claim it as your own. Anyone can right-click on an NFT image, save it, and mint it again. There have also been numerous examples of stealing art for themselves or scammers seeing a money-making opportunity. Unfortunately, the industry has that reputation.

NFT owners convincing themselves it’s not a scam pic.twitter.com/YSwLtLOmEf

Ever since NFTs became well-known in the public eye, people have lost millions of dollars to scammers. While Content Credentials won’t stop theft, it offers a way to provide proof that the NFT being sold is legit. Creators will also be able to connect their social media profile to their NFT work and the credentials will be linked on Behance, which is Adobe’s online portfolio site.

In addition to minting a work as an NFT, artists can use Content Credentials to capture and show what edits were made in a working image. The information is attached to the image when it’s being exported. This metadata provides a new level of transparency for professional and casual artists as Adobe tries to enforce trust in digital content. 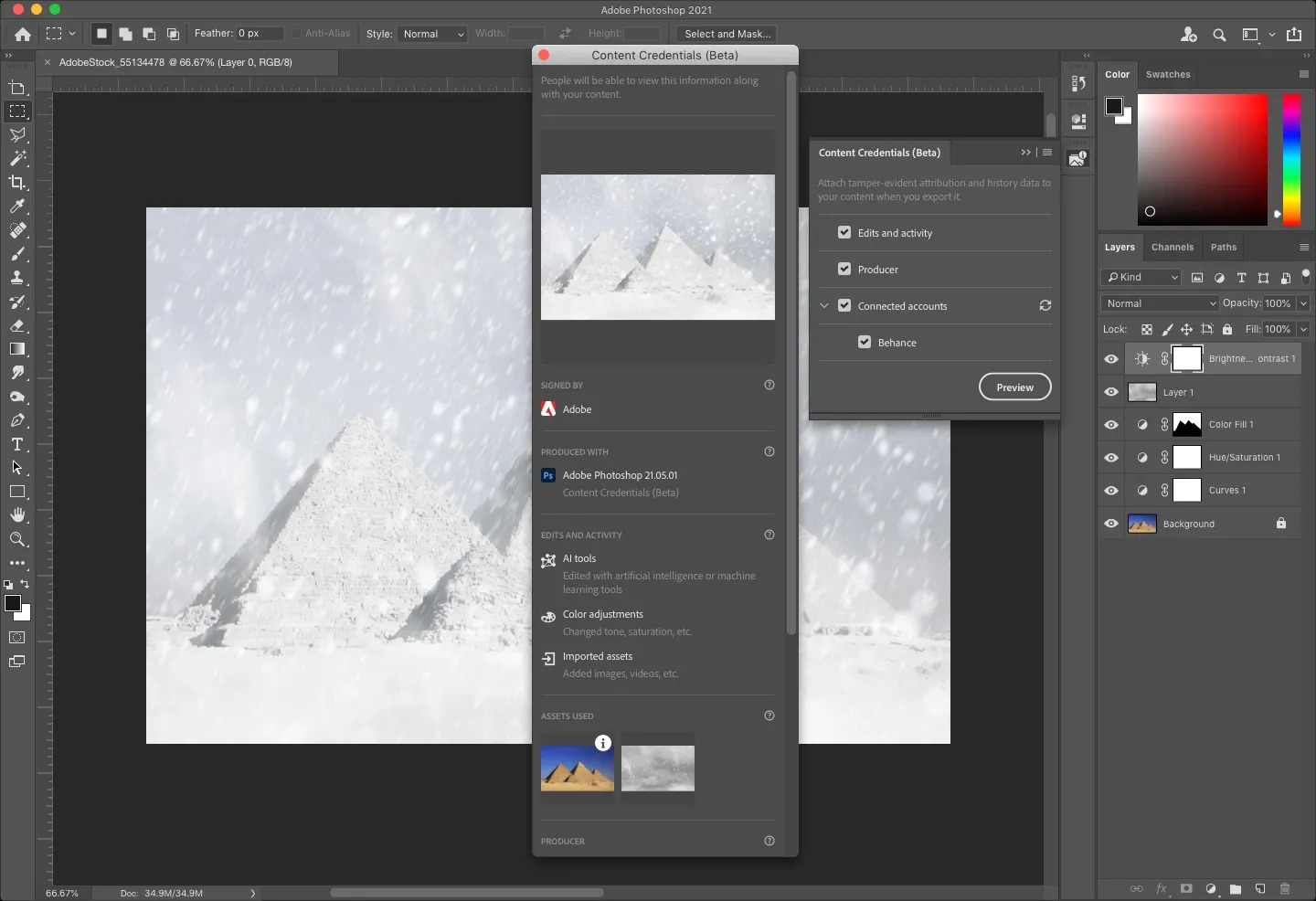 People want to know if the digital art they’re looking at comes from a legitimate place and not some art thief.

All of this NFT and content authentication come as a result of the Content Authenticity Initiative. Adobe and a bunch of other companies are coming together to create a system that securely authenticates digital content and fight against misinformation.

As I’m sure you’re well aware, misinformation and “fake news” have become a hot topic across many industries for several years now. Many people have criticized tech companies in particular for the role they play in transmitting information to the masses.

It’s gotten so intense that the CEOs of these companies have sat down in the hot seat in front of Congress to discuss what’s going on.

Needless to say, I think Content Credentials could go a long for legitimatizing NFTs in the public idea. I’ve seen numerous instances of people getting scammed out of their money with these NFT projects, and numerous YouTubers exposing these fraudulent assets or parody Twitter accounts making fun of people.

In my opinion, NFTs have a major image problem. But I do believe Content Credentials are a step in the right direction of easing fears.

Content Credentials is currently available to participants on Photoshop’s beta mode where Adobe will take feedback from the users. From there, the company will take the feedback and implement them before launching the official product.

The official release date has been released yet, but many speculate Content Credentials to come out in 2022.

Mastercard Will Offer New Cryptocurrency Service to EVERYONE

The War Over NFTs in Video Games

NFT
Bitcoin
Crypto News
Crypto News
We use cookies on our website to give you the most relevant experience by remembering your preferences and repeat visits. By clicking “Accept”, you consent to the use of ALL the cookies.
Cookie settingsACCEPT
Manage consent